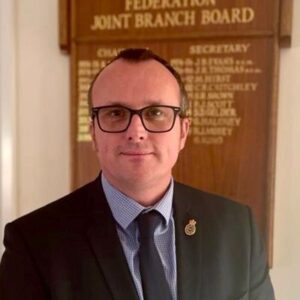 How long have you been a Fed Rep for?
Eight years, but I’ve been doing it full time from Leeds for the past three years – I’m the Deputy General Secretary. I’ve been an officer since 2001, so more than 20 years.

Why did you become a Fed Rep?
I know it sounds corny, but I really do it to help people, it’s about being a voice for people. I’ve witnessed certain things in the past which haven’t been very fair, but you can’t moan about things unless you step up and do something about it. That’s why I do it.

What’s a day in your life like?
Busy! I’m inundated all the time with constant phone calls and emails. Things that might appear trivial won’t be to the person who’s made the call. They’ve found the time to pick up the phone and talk to a Fed Rep, so it’s important to them.

Some things can be resolved quicker than others, of course, but you have to remember it’s a big issue to them. It might be helping with shifts or local pay issues, or it could be helping someone with a conduct case and hearing. It’s across the board, including health and safety, but it’s mostly conduct.

Being a Rep is about trying to sort out someone’s problem before it snowballs, if you can.

Is it a rewarding job?
We don’t do it for tea and medals, and nobody really thanks you! But there’s a lot of personal reward to be had from it. You might not always get the result you’re after, but it’s about putting in 100% and doing your best for someone.