Our Bravest Of The Brave 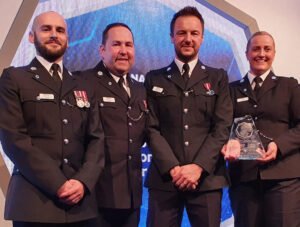 The 2021 National Police Bravery Awards has celebrated four West Yorkshire Police officers who arrested two teenagers as the offenders attacked and killed a factory worker with a Samurai sword.

The officers disarmed the attackers outside a pharmaceuticals company in Huddersfield in January 2020. Robert Wilson, 53, died after being stabbed more than 100 times. Kiyran Earnshaw, 18, and Luke Gaukroger, 16, were jailed for life after pleading guilty to murder.

During the trial at Leeds Crown Court, the court heard how Earnshaw and Gaukroger were heavily intoxicated at the time they had carried out the “frenzied and senseless attack”. They chased and attacked Wilson and another man after being asked to leave the factory car park.

PC Dutton said: “The bloke with the Samurai sword turned around and looked towards us, but carried on with his hacking, sawing motion just as though if he didn’t care…it was just barbaric, inhumane.”
Prime Minister Boris Johnson praised the “dedication and conscientiousness” of all the nominees. He said: “It is this unflinching bravery, alongside your dedication and conscientiousness, that inspires my steadfast support for the police.”