An Act Of Outstanding Courage 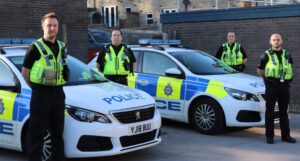 Four West Yorkshire Police officers who courageously detained two teenagers who had just murdered a man with a Samurai sword have been nominated for the 2021 National Police Bravery Awards.

In January 2020, PC Daniel Broderick, PC Elizabeth Brook, PC Anthony Dutton and PC Richard Knowles responded to reports of a man being attacked with a sword outside a pharmaceutical factory in Huddersfield.

Upon arrival the officers, armed only with conventional PPE, were faced with two men using a Samurai sword to attack their victim in a barbaric assault. The officers chased the offenders, deployed Taser and pepper spray and detained them both, despite the offenders still being in possession of the murder weapon.

The officers returned to the victim and attempted to revive him until the arrival of the ambulance service, whereupon, sadly, the victim was declared dead.

The victim’s colleague’s hand was severed and he managed to run away. But the attack upon the murder victim was brutal.

Kiyran Earnshaw, 18, and Luke Gaukroger, 16, both admitted to the murder of Robert Wilson, 53. In September 2020, Earnshaw was jailed for a minimum of 22 years and Gaukroger was ordered to serve 16 years and eight months.

“Despite the horrific nature of what they had come across, these officers displayed an outstanding level of courage and selflessness in confronting danger and detaining both of the individuals concerned. At the time of this incident, PC Brook had only four weeks’ service.

“The officers then went above and beyond to make every effort they could to provide CPR and support to the victim, despite the horrific injuries that had been inflicted upon him.”
Brian added: “Our thoughts remain with the family and friends of Mr Wilson.”

As well as being nominated for The National Police Bravery Awards, all four officers were submitted for an in-force bravery award, plus two received a Divisional Commander’s Award and one received a Humane Society Award.

The officers will attend The National Police Bravery Awards in London on 9 December, which honours officers from across England and Wales who have performed outstanding acts of bravery while on or off duty. The Awards are sponsored by Police Mutual.