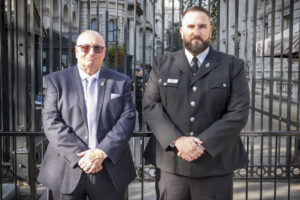 A West Yorkshire Police officer who interrupted his weekly shop to courageously arrest a dangerous knife-wielding robber was recognised at the delayed 2020 National Police Bravery Awards.

PC Neil Masheder’s superb off-duty actions – running towards danger despite not being in uniform or having protective equipment – saw him join more than 90 colleagues from across England and Wales nominated for their brave acts at the prestigious awards event in London. It included a trip to 10 Downing Street.

“It’s absolutely brilliant, this is something I have always wanted to do,” said Neil. “It’s great to be a nominee for the National Police Bravery Awards.”

The officer was shopping at a supermarket in the Leeds area on 10 September 2019 when he saw a stolen Seat Leon in the car park.

The car had been taken during a burglary, along with cash, and had been used in two knifepoint robberies of a man and a convenience store in Kirklees. The suspects had also used the vehicle for another burglary, in which they stole two more cars.

During the convenience store robbery, the men had dragged two female shop workers into the office to demand they open the safe, all the while threatening them with harm.

The car thefts were carried out in the middle of the afternoon, during which the men had threatened to stab their female victim as they took her car keys and jewellery.

Her cars were later found, but the perpetrators were still using the Seat for their crime spree and had changed the number plate to avoid detection, something which had been reported to the police by a member of the public.

Now the Seat was parked in a disabled bay with two occupants inside.

Realising the suspects needed to brought in to prevent further harm to the public, PC Masheder rang in the sighting to the control room.

As he did so, he spotted the driver returning to the vehicle and stayed on the call to keep officers abreast of the situation. However, the suspects then prepared to leave the supermarket car park, prompting PC Masheder to intervene. He knew the men had to be taken off the streets as they were armed and dangerous, but as he was off-duty, he had no PPE or means to get them detained. That didn’t stop him from preventing the vehicle from leaving and, after a violent struggle, he managed to get the driver under control and under arrest, while the driver’s accomplices fled the scene. Thankfully they were soon found and arrested by attending officers.

The three were convicted at the conclusion of a nine-day trial at Leeds Crown Court in March 2020, but jumped the dock and escaped from the court building.  They were pursued by officers who had been at court, including PC Masheder, and all were quickly detained, with two of them having fled two miles away to the Hyde Park area.

The third defendant was arrested in a pub in Leeds city centre.  All three were charged with escaping lawful custody. In May 2020 they were jailed for a total of 52 years for all of their crimes.
West Yorkshire Police Federation Chair Brian Booth commended PC Masheder’s actions, saying he certainly prevented more members of the public being robbed and harmed.

“West Yorkshire Police officers are never off-duty and what an incredibly selfless and courageous act,” he said.

“These three violent and despicable criminals were playing a real-life game of Grand Theft Auto. They were armed and dangerous and had already robbed and threatened several people at knifepoint.
“If Neil hadn’t bravely intervened on his day off, they would have gone on to carry out a lot more violent crime. It’s especially impressive given he had no PPE or means of detaining them, apart from his determination and dedication.”

The National Police Bravery Awards honour officers from across England and Wales who have performed outstanding acts of bravery while on or off-duty.