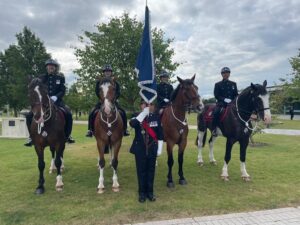 The Prince of Wales was among those at a dedication ceremony at the £4.5m memorial and garden, where a minute’s silence was held.

Prince Charles paid tribute to the “valour and sacrifice” of those who had died, and expressed thanks on “behalf of the nation”.

“Our expressions of appreciation will always be hopelessly inadequate and, unfortunately, make the anguish no easier to bear,” he said.

“I do pray that this memorial will not only provide a hallowed place for us all to pay tribute to each of them, but also the reassurance that those who have given their lives so selflessly will leave a lasting legacy and will never be forgotten.”

Meanwhile the policing family is preparing for the National Police Memorial Day service, which is taking place in Lincoln on 26 September after being postponed last year.

West Yorkshire Police Federation Chairman Brian Booth said: “It’s good that some kind of normality is returning to life and important events like this can start to take place again.

“Although the National Police Memorial Day service will be smaller this year, its significance is not.

“On this day we will pay respect to the memory of our lost colleagues. I look forward to the time when the event fully returns to some normality. This is when we take the fallen officers’ families with us and make sure it is a special weekend for them.”