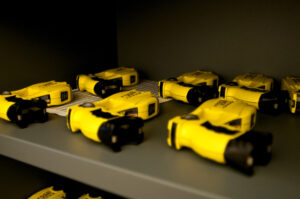 “The Independent Office for Police Conduct struggles to maintain any credibility with the rank and file officer – and this report will do very little to reverse the situation.”

That’s the view of West Yorkshire Police Federation Chairman Brian Booth, who was responding to the Review Of IOPC cases Involving Tasers report, where the watchdog raised concerns with Taser guidance, training and scrutiny.

The report has been slated by a uniformed voice in policing, with the PFEW dismissing the review as “statistically insignificant”.

It stated: “This report makes recommendations on 101 IOPC investigations into Taser use in a five-year timescale. However, there were almost 100,000 recorded Taser usages in this period, so it is statistically insignificant.”

And police chiefs said the report by the IOPC is “vague, lacks detail [and] does not have a substantive evidence base”.

Brian said: “Failing to consult with Taser practitioners has left a blatant gaping hole in the paper. Concentrating purely on incidents that had already been identified as needing extra scrutiny, but failing to recognise the vast majority of Taser deployment success.

“There are 17 recommendations, the vast majority of these being standard practice already within West Yorkshire. The report does not take into account the unpredictable nature of policing situations and the fact that officers may not have all the facts in that split second prior to making a decision to use force.

“This is especially the case when we look at vulnerable adults or children.

“A vulnerable adult can be an individual suffering from a mental illness and presenting a substantial threat to the public; a child includes anybody up to the age of 18.

“Both these groups can – but not always – pose a significant threat to my colleagues and especially when weapons are involved.

“A reliable report would have widely consulted with my colleagues and taken into account the positive outcomes that Taser has brought to policing.”

Chief Constable Lucy D’Orsi, speaking on behalf of The National Police Chiefs’ Council, said: “Unfortunately, this report by the IOPC is vague, lacks detail, does not have a substantive evidence base and regrettably ignores extensive pieces of work that are already well underway and, indeed, other areas where improvement could be made.

“I advised the IOPC of my concerns and am extremely disappointed that it did not engage with policing, attend a Taser training course or consult the national independent experts who we work with, while undertaking its initial research.

“Only 101 Taser uses over a five-year period were reviewed and these were all ones that had been investigated by the IOPC. It is concerning that this only represents 0.1% of all Taser uses in the same period, which totals 94,045.”