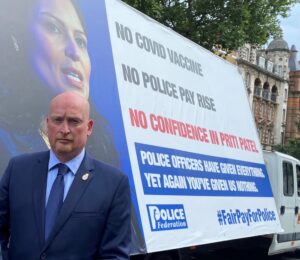 “My colleagues deserve better… my personal opinion is that we now need to canvass our membership on whether they wish to seek full industrial rights.”

West Yorkshire Police Federation Chairman Brian Booth has said that officers must be asked whether they want the Federation to seek industrial rights – which would include the power to withdraw labour – following the 0% pay offer announced by the Government last month.

“What an absolute insult and waft of utter disdain delivered to my colleagues by the Government,” he said.

“Police officers have given everything this past 18 months. The Government have given us nothing. No priority for the COVID-19 vaccine – despite the risks we have faced – and now no pay rise.

“What makes this harder to understand for my members is that they have been front and centre in the fight against COVID, like those who have received a pay award.

“It’s utterly shameful behaviour from a Government that believes it is the party of law and order. Police officers have had 10 years of below-inflation pay awards – most of them being 0% or 1%.”

As a result of the vaccine and pay betrayals, the Police Federation of England and Wales (PFEW) has passed a vote of no confidence in Home Secretary Priti Patel and has withdrawn its support from the Police Remuneration Review Body, labelling the current police officer pay mechanism “not fit for purpose”.

It has called on the Government to agree on an entirely new and fairer system of remuneration decision-making, as well as reversing the 0% pay decision.