The Government Let Us Down 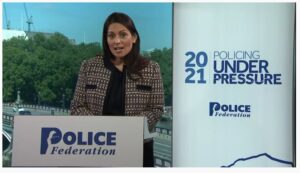 Officers feel let down and betrayed by the Government on vaccinations, the Chairman of West Yorkshire Police Federation has said, after Home Secretary Priti Patel was grilled on the issue at the PFEW Virtual Annual Conference on 9 June.

Despite the Home Office originally pushing for officers to be prioritised for the vaccine, Priti Patel said they had to follow the advice of the Joint Committee on Vaccination and Immunisation (JCVI). She said: “We absolutely had to prioritise the vaccine rollout in line with the overriding risk factors of age and clinical vulnerability.”

West Yorkshire Police Federation Chairman Brian Booth said: “It is a fact that officers feel let down and betrayed by the Government on vaccinations, and it worries me now that, should officers be facing a similar circumstance in the future, they will not have faith in the Government to support them.”

He also addressed the pay freeze, saying: “In relation to accepting the JCVI’s advice on vaccinations, why then does the Government not accept the Police Remuneration Review Body (PRRB)’s advice when it comes to pay and conditions? Officers have lost faith in the PRRB mechanism and it needs reform, removing political interference. Only then will officers have faith in it.”

During the conference, Shadow Policing Minister Sarah Jones said she backed a pay rise for officers. Brian said: “It’s good to see that Sarah Jones agrees with our position that officers deserve a pay rise, especially when they have been at the very front of dealing with the pandemic.

“It is recognised by the Government that officers have dealt with unprecedented demand, going forward and putting themselves at risk, yet that recognition fades when it comes to remuneration.”

But Brian agreed with Priti Patel when she said in her speech that she believes police forces should be proactive in releasing body-worn footage to counter ‘trial by social media’. Brian said: “The trial by social media normally spirals out of control because it portrays only one side of the incident. This is about being open and transparent to the public we police.”