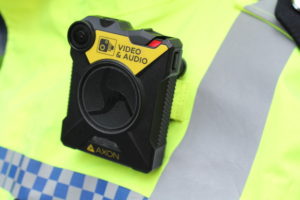 Footage captured by officers’ body-worn video cameras should be shared with the public to stop officers being “hung, drawn and quartered” on social media, West Yorkshire Police Federation has said.

A number of high-profile videos have been shared on social media, showing officers making arrests and stops.

Often they are edited in a way to make officers’ actions look unprofessional, or they are accompanied by anti-police messaging and hashtags.

Because many police forces won’t sanction the release of officers’ own video footage, it means officers often feel they have been left without a right to reply.

West Yorkshire Police Federation Chairman Brian Booth said he was backing calls from the national Federation to get the footage out there.
“This is about protecting officers for doing their jobs right,” he said.

“It’s not helpful when celebrities doctor footage for their individual gain or political gain, with a hashtag that goes viral.

“It’s shameful that we, as the police, have to sit back silently and let it escalate so that the public only see one side.
“Officers are being hung, drawn and quartered on social media, with no right to reply.

“Then, because it gets shared so much, the incident gets referred to the IOPC.

“It’s not right, on many occasions it’s wasting police money. We should be putting out the true story with body-worn video footage straight away,” Brian added.

Some forces have argued that putting out footage might publicise the rare occasions when officers do something wrong.
It’s not a view shared by Brian.

“If the officer in question has done something wrong, then put the officer through an investigation – hiding behind saying officers do bad things and we shouldn’t publicise it isn’t right,” he said.

“We can say we have reviewed the video and the officers are under formal investigation, meaning we cannot share it.
“But in the majority of cases, the officer will have done nothing wrong – if the footage is reviewed and that’s the case, then get it out there!”