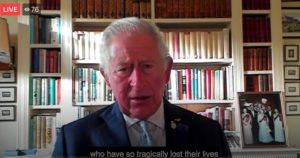 The Police Family refused to let COVID-19 stop them from paying tribute to their fallen colleagues, as this year’s National Police Memorial Day (NPMD) went online.

Hundreds of thousands of viewers watched the moving service, made even more poignant this year by the death of Met Police Sergeant Matt Ratana who was killed on duty in Croydon a few days before the ceremony.

NPMD Patron HRH The Prince of Wales, Prime Minister Boris Johnson, Home Secretary Priti Patel and the Archbishop of Canterbury all shared online messages thanking all officers for their sacrifices and dedication to duty.

NPMD National Co-Ordinator and National Police Chaplain the Rev Canon David Wilbraham said the event had been a special one.
“The service was even more poignant this year due to the events in Croydon,” he said.

“Our brave officers selflessly protect us every day, and we wanted to make the virtual event as special as possible. Feedback has been overwhelmingly positive. NPMD’s reach to the police family was considerably more than ever before, and extended well beyond the policing world.

“I extend my deepest gratitude to those who participated in the service itself and to those who watched and joined in solidarity to pay tribute.
“And a thank you to the small but dedicated team who made the event possible.”