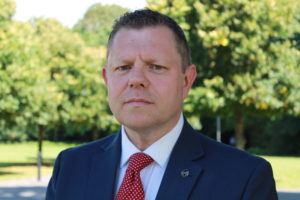 A decision by Amazon UK to continue selling merchandise containing a ‘Blue lives murder’ logo and graphics suggesting police brutality has been roundly condemned by the PFEW Chair John Apter.

He described the company’s decision as “a kick in the teeth” for police officers after senior company executives rejected his request to halt sales of the online items.

John had written personally to Amazon’s UK-based MD Doug Gurr and called on the company to stop selling the merchandise. In his letter, he demanded that Amazon took steps to remove a range of items being advertised on its site.

Following a meeting between John and Amazon UK executives, his plea was rejected, with the company maintaining that the merchandise does not contravene their policies.

John said: “Together with police colleagues who have contacted me from across the UK, I consider this merchandise to be highly inflammatory and deeply offensive.

“I believe most members of the public will agree with me that this calls into account the moral judgement of Amazon.

“I really can’t contain my anger and disgust that Amazon failed to act and refuse to remove the ‘Blue Lives Murder’ merchandise from sale.

“I think this is a bad decision and a wrong decision and smacks of poor judgement. I believe that this is a decision police officers and the public will find hard to understand and stomach.

“Given recent attacks on my colleagues, this was an opportunity for Amazon to hear the voices of those officers, their families and others who have objected to the sale of these items and to show support for policing during this difficult and dangerous time.”