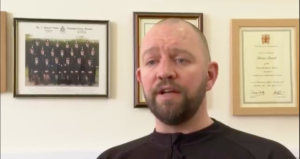 A West Yorkshire police officer who was deliberately mowed down by a motorist after he told him to get off his mobile phone has spoken of his anger and frustration after the man walked free from court.

PC David Hoyle suffered four broken bones in his back and had to take three months off work when he was hit by motorist Zakariya Khan.

PC Hoyle, who was off duty at the time, was filling up his camper van at a petrol station in Idle, Bradford, when he spotted Khan driving towards him and on his mobile phone.

“I filled up and was walking across the forecourt when he cut up another driver and I saw he was on his phone,” PC Hoyle said.

“I told him to get off his phone and gestured to him and that’s when he just drove at me.

“I put my hands on the bonnet to get my legs out of the way. I flipped over and hit the bonnet and the windscreen and landed on the floor and that’s when it all started to go rapidly downhill.”

PC Hoyle was taken to Bradford Royal Infirmary, where it was confirmed he had broken four bones in his back.

Federation Chairman Brian Booth said: “I am horrified to learn how the offender has walked away from court with a lenient sentence.

“It begs the question of what chance do we have as a society when an off-duty officer challenges inappropriate behaviour and is deliberately run over with a vehicle, causing significant injury, disruption to life and costing thousands in public money?

“There is a missed chance here to show that we will protect those who, even off duty, stand up and try to make a difference. The CPS has let us down in its handling of this case.”