Tasers Could Be Used By Colour-Blind Officers 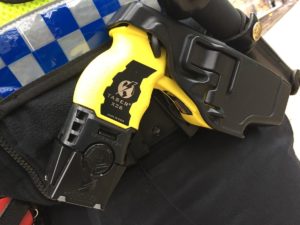 Police officers with colour vision abnormalities may be able to carry Tasers, after the College of Policing announced a policy review.

It means officers whose vision falls below the national standards could now be given enhanced training in Taser use and be assessed in using the device’s fixed sights and laser sight, instead of being denied access to the non-lethal weapon.

The PFEW has argued that denying the use of the device to officers with Colour Vision Deficiency (CVD) could be discriminatory and place them at more risk of being assaulted on duty.

He said: “We are pushing for a wider roll-out of Tasers. It will save lives or prevent officers receiving life-changing injuries. In over 90% of encounters where Taser is introduced it results in de-escalation – so the red dot alone diffuses 90% of violent incidents.

“Our survey data shows that 76% of officers are ‘always or almost always single crewed’ and we also know there is a significant increase in assaults against police officers, so we need to ensure they are properly equipped to do their job effectively. Taser is part of that, regardless of whether you have CVD.”

CVD is more likely to affect men, and some sufferers are unable to distinguish between different shades of red.

The PFEW says it is working with the UK distributor of EnChroma lenses, which can help correct, but not cure, CVD – although the lenses cannot currently be worn during Taser testing.

National Firearms and Taser Lead Steve Hartshorn said: “There is a genuine need to remove the requirement for a CVD test for what many see as essential police equipment. If they are in the job, they should be allowed to perform the full range of policing duties open to everyone.”