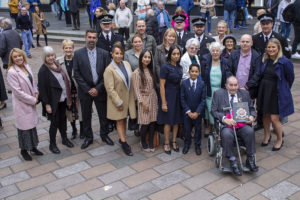 HRH The Prince of Wales, who is Patron of National Police Memorial Day was among those attending the service, led by Canon David Wilbraham. He was joined by Home Secretary Priti Patel; Scotland’s First Minister Nicola Sturgeon, more than 40 Chief Constables and 1,500 police officers and family members.

Brian said it was very important to celebrate the lives of fallen colleagues. He explained: “We’re here to celebrate our departed officers’ lives. It’s about remembrance; it’s about remembering the good things and unfortunately the sad things that happen day-to-day within policing.

“We lose our colleagues and it really has a big knock-on effect with officers, for their families obviously, and the public.

“This is a great occasion to actually celebrate these officers’ lives and what they’ve given for us.”

Six families accompanied the Federation to this year’s memorial day.

“We bring them every year,” Brian said, “and we invite all families who have lost a serving officer.

“Our Chief Constable fully participates with us. We take the families for a meal and we look after them. It’s what we should do when we lose one of our colleagues because I would like to think if I lost one of my family, the same would happen for them.

“We should remember. It is an act of remembrance. This is the one time when we all come together as a big police family and it should be carried on.
“I won’t hear people say, ‘no, we should cut money and stop doing things like this. We need to do this, it’s important for our policing family.”

In the commemorative brochure, HRH The Prince of Wales said: “Policing in the United Kingdom has enormous pressures to contend with, no more so than on the front line. As society changes, so must the way in which we support and protect our communities. Your job is one of the toughest there is, and all too often your efforts go unrecognised.

“I am proud to be with you today, and I particularly want you to know how very much I appreciate all that you do, and the sacrifices you make. You and your families have a very special place in the heart of this nation.”

During the service, candles were lit for officers in each of the four nations. Representing Scotland was Margaret Sinclair and her daughter Patricia, for PC Leslie Sinclair, who died in 1972 following a road traffic collision.

Representing England was Rumbie Mabuto and her children Kenny and Sophia, for DC Joe Mabuto, who died after suffering a heart attack on duty. Representing Wales was William Parker, son of PC Andy Parker, who was killed in a motorbike crash when travelling home after a night shift.

And representing Northern Ireland was Margo Hetherington, daughter of Reserve Constable Jacob Rankin, who was fatally shot in 1978 whilst on duty by terrorists.

Andrea MacDonald, Chair of the Scottish Police Federation, read the names of officers who have lost their lives during the past year: PC Joseph Robert Cooke and Sgt Colin Michael Fox, both of the Met; PC Daniel Clayton-Drabble, PC Kevin Flint and PC Andrew Harper, all of Thames Valley Police; and PC Roy Buggins, of Police Scotland. The service also paid tribute to US Special Agent Nole Remagen, who died while on duty in Scotland.

There was silence as petals of remembrance, representing all who have lost their lives, descended from the gallery as the Last Post was sounded.