Ban On Officer Tattoos Is Lifted 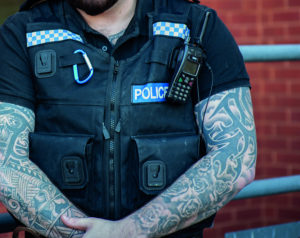 West Yorkshire Police officers can now display their tattoos after the force reversed its cover-up policy.

Force Regulations stated that officers could display ‘small, inoffensive and non-prominent’ tattoos on their necks and hands, but tattooed arms must be covered up.

But now, thanks to 18 months of lobbying from West Yorkshire Police Federation, that policy has been eased. It means officers’ arm tattoos can be on display on duty, providing they are not in any way offensive.

The change in policy brings the force in line with neighbouring constabularies.

A Federation survey of officers last year revealed the majority backed a change in the restrictions; 1,182 officers completed the survey with the majority (55%) saying they had a tattoo.

And 80% said the policy didn’t represent the communities they serve.

West Yorkshire Police Federation General Secretary Guy King said: “It has taken some considerable time and effort, but the force has agreed to change the policy on tattoos. They have listened to the case, and West Yorkshire Police Officers can now openly show their tattoos.

“This brings West Yorkshire in line with what is accepted in most other forces around the country. The decision to change the policy comes after continued pressure from the Federation over the past 18 months.

“We have long argued that the policy was bizarre and unfair, as small and non-prominent tattoos on the hands and neck were allowed to be shown but all others must be covered.

“It brings us in line with what is widely accepted within society at large and reflects the modern, diverse workforce we have.

“I’d like to thank CC Robins and his command team for listening to officers.”