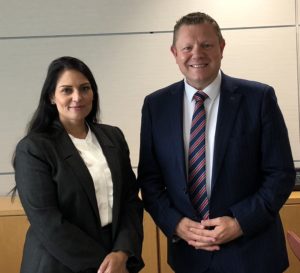 The future of the police service and officer health and welfare were top of the agenda when PFEW Chairman John Apter met Home Secretary Priti Patel.

Mr Apter tweeted to say no issue was ‘sugar-coated’ during the ‘constructive and productive’ meeting held earlier this month.

It was their first meeting since Priti Patel took up the role of Home Secretary in July.

In a series of Tweets, Mr Apter said she understood the pressure policing is under.

“Had an honest and constructive conversation about a wide range of issues affecting our members. Officer welfare and safety was a big part of the discussion with a focus on how the Policing Covenant can give tangible support,” he wrote.

“We talked about the 20,000 extra officers, Taser, emergency driving legislation, length of IOPC investigations, specials being members of the PFEW and the need for some action to back up the promises being made.”