We Need Our Officers Back 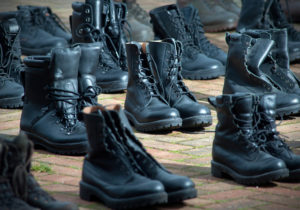 The Government’s credibility is undermined by statements denying the link between falling police numbers and the rise in violent crime.

West Yorkshire Police Federation Chairman Brian Booth says it is time to get back the 20,000 officers who have been lost as crime rises around the country.

Brian was speaking after Prime Minister Theresa May failed to recognise the link between police numbers and rising crime – as sadly more and more children are being murdered with knives.

“The credibility of our Government is seriously undermined with ridiculous statements like this,” says Brian.

“The service has lost its capability to use preventative powers against crime, due purely to the lack of resources.”

“We are reacting to these horrific incidents on a daily basis. Could any of these crimes have been prevented? The simple answer is yes, with proper funding of the police service which would enable more officers on our streets.”

“I wholly agree with Sir Bernard Hogan-Howe, we need to get back the 20,000 officers we have lost due to austerity.”

“We have lost the streets, the Police know it, the public know it and more importantly the criminal community know it.”