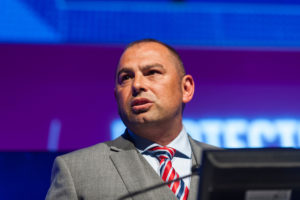 Repeated exposure to trauma can have a serious detrimental effect on a police officer’s mental health – with roads policing officers at high risk, along with those who investigate child sexual exploitation and firearms officers.

PFEW Vice-Chair Ché Donald gave a talk on trauma on day two of the Roads Policing Conference in Hinckley, Leicestershire, which illustrated the widespread nature of the issue and the urgent need for procedures to be put in place to protect officers.

He shared a snapshot from the Police Federation’s 2018 survey on demand, capacity and welfare, which was published in February, which shows that, during their policing career:

“Unlike in the military, police officers do not have periods away from the front lines – you are the front lines. There are 18% fewer officers and policing has gone from a potentially proactive service to being a reactive service – we have officers going from one job to the next without the time to pause and let their brains process what they are experiencing.”

He added: “What we’re doing for the first time is we’re capturing data. Everything has been anecdotal but now we’re trying to capture that data and establish the frequency.

“Officers are not robots – at the end of the day everyone is just a member of the public, putting on a uniform and performing a role.
“Over the course of 30-40 years for our cops, what are they exposed to… what is and what isn’t being processed correctly? That’s our worry.
“It might sound like a cliché, but we need to start focusing on people.
“At the moment, we’re focusing on trying to get to the jobs. If you don’t look after the people getting to those jobs you won’t get the jobs at all.”
The Government has pledged £7.5 million to support officer welfare but the funds have still not been directed to where they need to be.