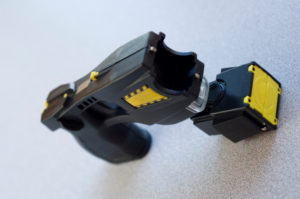 The decision to allow student officers to use Taser will help protect the police against violence.

That is the view of West Yorkshire Police Federation Chairman Brian Booth, who was speaking after it was announced that the College of Policing has drawn up a Taser training package for student officers.

However, it will be the decision of individual Chief Constables to decide if their student officers will be given access to the equipment.
Brian said: “Taser is an effective remedy to the increasing levels of violence against our officers. It has very low levels of injury against violent individuals and gives our officers the chance to minimise the risk of personal injury. This is a win for officers and the public.”
The announcement was made by Policing Minister Nick Hurd in a written ministerial statement. However, the Government did not announce any new funding to support the change of policy.