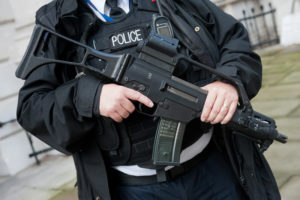 The role of authorised firearms officer can be both “the best job in policing” and “the worst job in the world”, the new firearms lead for the Police Federation of England and Wales has said.

Steve Hartshorn, who has just taken on the role from PFEW Vice-Chair Ché Donald, has described how work in firearms can be a “very lonely place” and as such officers need all the support they can get.

Steve said: “Firearms officers do a unique job within policing in England and Wales. Let’s not sugar-coat the pill, they are trained to deal with immediate threats to life and every time they sign out their weapons they realise there is possibility that one day they may be required to pull the trigger. That may well mean that a person dies and such decisions are never taken lightly.

“They are an extraordinary group of men and women and I was lucky to have been one of the few to have performed this role as an armed response officer.

“It is so important for me as Firearms Lead for the Federation that I represent them to the best of my ability.”
Steve added: “I know what it takes do this specialist role, the physical and mental toll it can take – not only the officers themselves but their family and friends as well. I want to ensure they have all the support and assistance they need.

“Full firearms kit, depending on the role or deployment, can tip the scales at up to four stone (25kg). Add to that the weight of expectation heaped on you by the service and society alike, it’s certainly a heavy burden to shoulder.”

Steve has promised to work with the Police Firearms Officers’ Association (PFOA) and the Welfare Support Programme to ensure officers are protected in their highly-scrutinised and ultra-challenging role.

He added: “I do have a real concern about what the reaction of society, the media and investigators alike would be if, or when, officers have to shoot a young person in possession of a lethal weapon.

“No doubt the pressure on them will increase and may well further harm the ongoing work to recruit and retain other armed officers.

“I consider being a firearms officer the best job in policing but I know there are times when it can feel like the worst job in the world.”