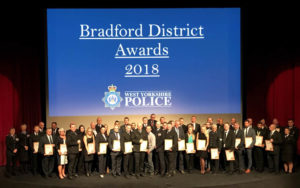 Sgt Noel Whitaker and PCs Michael Daisey and Dave Mitchell have been praised for their efforts in helping a man who was threatening to harm himself and others with a broken bottle in Bradford city centre.

They were among the West Yorkshire Police officers congratulated for their outstanding work at the Bradford District Policing Awards.

Among those receiving Judge’s Commendations were DC Alison Hanson, who was commended for a rape investigation, which resulted in an 18-year sentence for the perpetrator.

She also received an award for her service to the force over the past 30 years.

DCs Jodie Hayes and Louise Clayton were recognised for their efforts in securing convictions for a historic sexual abuse investigation which involved a number of victims from across the district and led to the main perpetrator being jailed for 21 years.

The Bradford District Cyber Team were also rewarded for their e-Safeguarding training, which was delivered to more than 31,000 youngsters and their parents in the 2017/18 academic year.

He said: “It’s great to publicly recognise fantastic examples of police work. I would like to congratulate all the winners for their efforts and achievements which have helped to keep people in Bradford District safe over the last year.

“Some of the stories behind these awards highlight the challenges faced every day by all those working in the police who work tirelessly in difficult circumstances.

“I am extremely proud of their commitment and unquestionable dedication to serving the people of the district.”