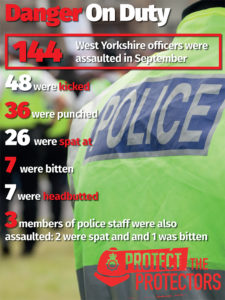 People who assault officers and other emergency services workers could face up to a year in prison after the Protect the Protectors Bill was granted Royal Assent.

The Assaults on Emergency Workers (Offences) Bill will become law in November and sends out a ‘clear signal’ that assaults will not be tolerated.

West Yorkshire Police Federation has been at the forefront of the campaign to increase punishment for people convicted of assaulting police officers.

She became so concerned for his safety that she called 999 for back-up.

Official figures have revealed there were more than 26,000 assaults against police officers, including British Transport Police officers, in England and Wales during 2017/18. However, that figure is thought to be much higher due to assaults being under reported.

PFEW Chairman John Apter said: “Being assaulted – whether you are a police officer, firefighter, prison officer or paramedic – is unacceptable and the sentences should be harsher,” he said.

“Whilst we didn’t get everything that we wanted in this Bill, it is a start and a significant improvement on what we had.

“Our journey to ‘protect the protectors’ hasn’t finished – we will continue to lobby to ensure that when our members and other emergency services are assaulted, those responsible are given harsher sentences than they have in the past.

“We will now look to the courts to use their new powers to the fullest and provide the deterrent and protection that police, and emergency workers deserve.”