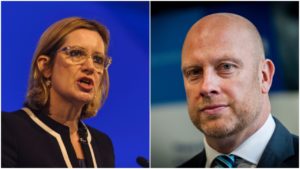 Amber Rudd has been accused of wanting to see no evil, hear no evil after ignoring the perilous reality of policing in West Yorkshire during a two day visit to the area.

Ms Rudd – when challenged over her rose tinted view of policing by Nick at the Police Federation of England and Wales Conference in May – said, if re-elected, she would visit West Yorkshire Police to get a true picture of the unacceptable level of demand on officers.

However the Home Office has not responded to the associated written invite from West Yorkshire Police Federation – sent in the days following the conference – and during Ms Rudd’s two day visit to West Yorkshire this week she snubbed the opportunity to meet with front line Bobbies and find out a true picture of policing.

Nick said: “Whenever there’s a major disaster or whenever officers deal with a terrorist incident, or run towards danger, are badly injured or sadly make the ultimate sacrifice, we hear plenty of plaudits and platitudes from the governing politicians who make the decisions on police funding and pay.

“But they can save the fake plaudits and platitudes on behalf of the Government, because if they really cared about what police officers did, they would actually go and visit them, and keep their promises, and just listen to them about what the demand is like.

“They would get a first-hand account about the real pressures around custody suites and officers dealing with vulnerable people and their complex issues, the pressures around having to deal with more than 12,000 missing people a year and that impact it has on resources, the pressures around losing 20% of frontline police officers and the increase in workload, the lack of detectives to investigate crimes, the virtual disappearance of roads policing units and the complete erosion of neighbourhood policing at a time when it is so needed.

“She would have also been told about the increase in sickness especially around officers mental health due to the stresses and strains of the job. Stresses and strains the Government have spectacularly failed to alleviate over the past seven years. Indeed they have compounded it. They have brought the police service to its knees and It is not a legacy to be proud of.

“All of these things she could have heard first hand but she chose not to, and that just really shows the true colours of her as Home Secretary and how policing is only on the agenda when the Government can make positive capital out of it.”

Speaking in May, Ms Rudd told the PFEW conference: “I accept your invitation to come up to West Yorkshire. I do not just sit back and listen to my advisors, I do go out and visit the places myself and I will make sure I will do if I get elected.”

Speaking today, Nick added: “Amber Rudd has not seen it fit to go and speak to any police officers or visit any police stations within West Yorkshire to look at demand, workloads, and listen to officers and see at first-hand what we face – as she promised to do at conference when I challenged her. She has reneged on her promise to come and see for herself.

“There needs to be a reinvestment in policing nationally, frontline officer numbers need to be boosted, but that costs money and the Government don’t want to spend money and they don’t want to hear the rationale, the reasons why they need to do this. So they’ve avoided it.”

If Ms Rudd had taken the time to visit a West Yorkshire Police Station on Wednesday morning, she would have discovered there were more than 1,000 outstanding calls across the five districts, 41 missing persons to find and 73 detained persons in custody to interview and process across five custody suites.

Nick concluded: “Police officers are tired of the platitudes. Actions speak louder than words – and by the Home Secretary coming to West Yorkshire, spending two full days in West Yorkshire, and not visiting one police station… it’s nothing short of a disgrace.”