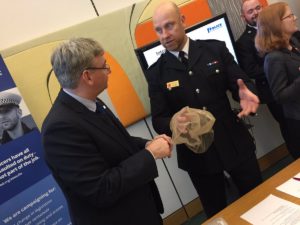 The guards will form part of Officer Safety Training – and once trained, officers will be allowed to use them operationally on the streets.

West Yorkshire Police Federation Chairman Nick Smart – who earlier this year attended Parliament to outline to MPs the safety aspect of these guards for officers (pictured) – is delighted at the decision.

“This is about protecting the protectors as they go about their duties and keep the public safe,” said Nick.

“The introduction of Spit Guards is something we as a local Federation have been lobbying both politicians and senior officers to review and agree to the use of for some time.

“Approximately one in five of all assaults on police officers in West Yorkshire currently are spitting offences. Not only is it disgusting and degrading for a police officer to be spat it, it carries the risk of passing on infectious diseases which may require hospital treatment and anti-viral drugs.”

Nick added: “There is nothing at present in terms of equipment to stop offenders from spitting at officers. This is a proportionate response to a legitimate threat to police officers.

“We have seen a number of instances where officers have been subjected to offenders spitting blood and saliva at them. There is one confirmed report of a Met officer contracting Hepatitis this way.

“Ultimately the guards will not need to be used if people don’t spit at police officers. Suspects have a choice – to spit or not to spit. It’s that simple.”

Nick concluded: “Anyone who decries this move or speaks out against it is simply putting the human rights of criminals who deliberately spit at police officers above the rights of police officers. We must protect the protectors.”

Spit Guards have been used in custody suites in WYP for a number of years.