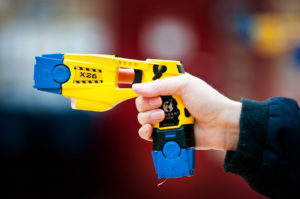 Tasers should be routinely issued to all front-line police officers in West Yorkshire to help keep people safe, an overwhelming majority of police officers AND the public in the region have said.

A poll by West Yorkshire Police Federation reveals that 90% of WYP officers feel all frontline colleagues should be issued with Taser whilst on patrol. This was backed up by 86% of the public in West Yorkshire in a separate survey.

While indicating that more officers should carry a Taser, the results of the police officer survey show that two out of three West Yorkshire police officers (65%) want to remain unarmed – but see a significant increase in fully trained firearms officers.

More than 1,500 West Yorkshire Police officers responded to the survey on Taser and Firearms, which ran throughout July. The Federation also surveyed the West Yorkshire public on these issues – and received nearly 6,000 responses.

Other results in the survey show:

It also links into the Federation’s ongoing #ProtectTheProtectors campaign and provides a body of evidence on which to lobby politicians in relation to police officer safety, police resources and funding.

Mr Smart said: “Given the recent terrorist attacks in London and Manchester and the changing nature of threats faced by police officers nationally this was an important survey and has provided some clear results.

“It is apparent that an overwhelming majority of police officers and the public we serve believe police officers should be routinely carrying a Taser when on patrol. And that – while many officers do not want to be routinely armed – there is a distinct desire need to increase the number of armed colleagues available.

“West Yorkshire Police officers must have the appropriate equipment to keep themselves, their colleagues and the public safe. And it is also vital that we have the right number of officers with that equipment available when they are required.”

Mr Smart added: “We police by consent and the fact that the vast majority of the public believe that officers should routinely carry a Taser is important to note. Our survey also indicates that the public are open to an increased armed policing presence on our streets.

“If this makes the public safer, and feel safer, then this reinvestment in policing needs to be done. However be under no illusions –  this will all require significant investment in equipment, training and increasing police officer numbers.

“There is no other option for politicians – keeping the public safe costs money. They need to listen. At the end of the day we must protect the public. And we must ensure we also protect the protectors.”