Share your views on carrying Tasers and being armed 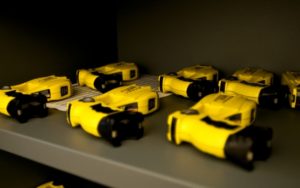 West Yorkshire Police Federation has launched a survey asking whether police officers in the area would like to carry Taser and be armed with a gun.

Members are being asked from today (Monday 3 July) whether they would be willing to carry a sidearm or carry a Taser to keep both themselves and the public safer.

Officers are being sent the survey via their local Federation Representatives.

“This is an opportunity for police officers to feed back their views and have their voice heard. It will also allow us as a Federation to make effective representation with key stakeholders moving forwards, such as our Command Team, Police and Crime Commissioner and local MPs.

“Therefore we’d ask all officers to complete the survey because the greater the level of participation, the greater evidence and body of feedback there is, which will ultimately assist us when negotiating and influencing on their behalf.”

Nick added: “This all feeds in our ongoing work to #ProtectTheProtectors – it’s about police officer safety, colleagues being able to protect themselves and thus be in a better position to protect the public.”

Options in the survey for officers Tasers include whether West Yorkshire Police should deploy Taser when officers are single crewed, whether colleagues would personally be prepared to carry and use a Taser and whether officers think carrying a Taser would keep both themselves and the public safer.

West Yorkshire Police officers are also being asked whether they think the routine arming of Police Officers will fundamentally change how policing is delivered to the public.

The survey of West Yorkshire Police officers runs until the end of July.

At the same time, the Federation is also asking the public via a similar survey for their view on these important topics.

Nick added: “Whilst we’re surveying officers at this time because of the changing nature of policing, we feel it’s only right and appropriate that we survey the public of West Yorkshire to get their view.

“We’ve always policed upon the principle of consent and engagement and we feel that it’s right that we consult the public about these two important issues. Ultimately, it’s the question of, ‘what do the public want the police to do and how best to protect them?’”

Currently approximately 400 West Yorkshire Police officers – out of around 4,500 – are Taser trained, while there are around 200 officers who are Authorised Firearms officers.

Nick added: “We will be using the results of the survey to assess our own position on these two options and to assist in our conversations with the force. The results will also ensure that we can effectively contribute in the national debate taking place in policing on these important issues.”