‘Why are we not looking after police mental health?’ 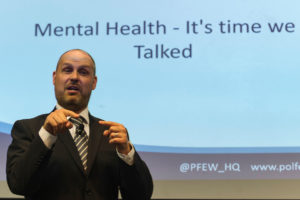 A police officer who has left the job because of PTSD and depression has questioned why policing spends money on keeping officers safe from physical harm but doesn’t provide the same support for their mental health.

Former Sgt Ed Simpson told the Police Federation of England and Wales that forces across the country spend 10s of thousands of pounds on personal protective equipment and training to keep officers safe from injury but it is sadly hidden injuries which are killing more police officers.

“We have PPE training every year but at no point do we ever train or talk about the fact that this job can make you mentally ill,” said Ed.

If 29 police officers were killed on duty in one year there would be outcry and something would be done about it, Ed told the conference.

And that, delegates were told, is how many police officers committed suicide in 2013.

He told the conference that figures from the Office of National Statistics show that between 2001 and 2013, 248 police officers either committed suicide or were “death undetermined”.

“I remember thinking why doesn’t anyone talk about this? Of course we might get mentally ill on this job. Look at the job we do,” said Ed.

His sickness began after dealing with the parents of a boy in a mortuary. He said the mother’s screaming reaction “completely destroyed” him and left him feeling helpless.

The officer’s health deteriorated considerably until four years later when he was diagnosed with depression.

Ed, a former West and North Yorkshire Police officers, said: “I felt like I wasn’t anything. There was nobody helping me back up. I was put on half pay the day my second child was born.