Federation works with force to give officers spit guards 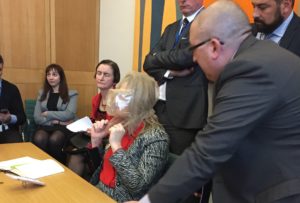 West Yorkshire MP Tracey Brabin tries on a spit guard at an event on police assaults for MPs last month.

Around a quarter of all police assaults involve being spat at, which poses a serious health risk to officers, said Federation Chairman Nick Smart. And that figure appears to be growing, he added.

Mr Smart said: “There has been around a 40% increase in the number of assaults on police officers in West Yorkshire last year, to between 1,400 and 1,500 by the end of March.”

“And 20% to 25% of those assaults involve an officer being spat at. So we are working with the force to look at rolling out spit guards for all operational frontline police officers.”

“We feel it is a necessary part of their equipment from a protective and health and safety point of view.”

Officers who are spat at are at risk of catching diseases such as hepatitis C and tuberculosis, and many face a nerve-wracking wait to see if they have been infected.
Mr Smart said more needs to be understood about spit guards to counter negative stereotypes.

He said: “The public needs to understand that these spit guards are not black hoods; they are mesh that you can see and breathe through.”

“They are very light, and they are only ever used if someone’s actually spat at a police officer or is about to spit at an officer. So the simple answer is if you don’t spit at cops they’ll never be used.”

Tracey Brabin, the MP for Batley and Spen, tried one on at Parliament earlier this year and a number of other public figures and journalists have worn spit hoods.

Mr Smart added: “Some organisations are saying they are cruel and degrading. But we would argue that it is more more cruel and degrading to be spat at and then face the trauma of going through a course of anti-viral treatment to ensure they have no caught any horrible diseases.”

“Spitting at police officers is indefensible and there is no practical alternative to spit hoods.”