Spit guards are essential kit for every frontline officer 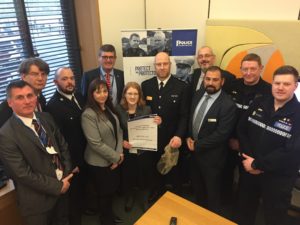 “We would like to see spit guards rolled out to all frontline police officers.”

That’s the view of West Yorkshire Police Federation Chairman Nick Smart, who was once again at Parliament this afternoon to talk to MPs about assaults on police officers.

MP Holly Lynch is introducing a Ten Minute Rule Bill to Parliament that aims to increase the maximum custodial sentences for assaults on police officers next week.

As part of that work, Nick spoke to some 35 MPs from across England and Wales to highlight why we need to #ProtectTheProtectors.

Nick said: “When you look at the current assault levels in West Yorkshire Police, 26% are down to spitting. The data doesn’t lie, there is a need for spit guards. Currently there is no deterrent.

“We are working with the sentencing council to address the deterrent but in the interim period it’s a health and safety issue.

“Give officers the equipment they need to do the job. Give officers spit guards so they have a defence when people start spitting at them.”

The last available figures on officer assaults showed 23,394 officers were attacked in 2014/15 in England and Wales – the equivalent of 64 a day.

Nick was joined in Parliament by West Yorkshire officer PC Dan McLaughlin, who told MPs about his experience of being assaulted.

Attendees at the event included MP Tracy Brabin, who tried on a spit guard as part of her research.

Nick has also vowed to continue his campaign to keep policing high on the political agenda.

“I’ve not met an MP yet who doesn’t support harsher sentences for those that assault police.

“So for the first time in a number of years policing is high up on the political agenda. It’s a cross-party interest, irrespective of political allegiances.

“We’re going to continue on that campaign of #ProtectTheProtectors around police assaults.”