“Officer’s bravery shows that police are never ‘off duty’ even when they are not at work.” 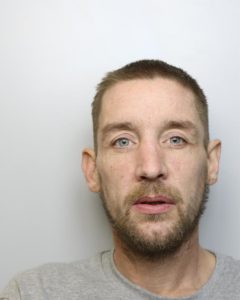 A man has been jailed for attacking an off-duty West Yorkshire Police officer at HMV at Leeds in November.

Paul Owens and was sentenced to a total of 6 years and 147 days at Leeds Crown Court today, following the attack on DC Richard Dove which saw him slashed in the neck, face and hands.

Owens was jailed 6 years for wounding with intent to resist arrest, 3 months for Attempted Theft (concurrent to the wounding) and 147 days for Possess Offensive Weapon (Bladed Article).

He had pleaded guilty at a previous hearing.

After the sentencing, Nick Smart, Chairman of West Yorkshire Police Federation, said: “Officers are acutely aware of the need to act on and off duty and place themselves in dangerous situations.

“The sentence reflects the seriousness of attack that DC Dove suffered. We hope that those who assault officers see harsh sentences imposed upon them. We will continue to support Richard moving forward.”

“Richard’s bravery shows that police officers are never ‘off duty’ even when they are not at work.

“I am pleased with the sentence handed down to Owens which sends out a clear message that assaults on police officers will not be tolerated.”