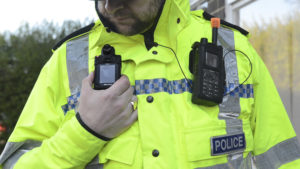 It has been announced that following a recent pilot of the devices in the Bradford District, a phased roll out will now begin.

Some £2 million pounds from a ‘Transformation Fund’ has been invested to support the project.

“This is a big positive for our officers,” said Craig Grandison, Health and Safety lead at West Yorkshire Police Federation.

“Research has shown there is a reduction in complaints made or complaints disproved at an early stage. It also provides better evidence in all prosecution cases, but specifically if an officer has been subjected to an assault or abuse.

“All in all it is better for Officers and the public alike, the only people who have anything to fear are those that act in an anti-social manner or commit crime.”

Assistant Chief Constable, Andy Battle is leading the work and says: “These devices will undoubtedly play a crucial role in the future of policing and members of the public can expect to see them routinely worn as part of our daily business.

“Their introduction marks a sea change in the way we are able to go about our work, ensuring the most vulnerable remain safe and feel safe.

“The Force has previously taken part in a Cambridge University study into their use, which has involved various models of camera. The outcome of this research has indicated that they hold some significant and tangible benefits.

“They have the potential to improve the efficiency and effectiveness of the criminal justice system, further improving integrity and the corroboration of evidence by acting as an ‘independent witness’.

“Likewise, they have shown to lead to an increase in early guilty pleas, which would mean a reduction in the need for victims, witnesses and the police in West Yorkshire to attend Court.”