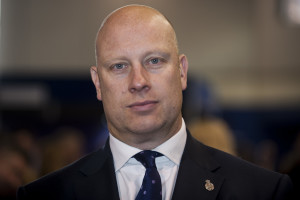 The Chairman of West Yorkshire Police Federation has called for a new ballot of police officers on whether they want industrial rights – after the Government today announced a meagre 1% pay rise for the country’s cops.

Nick Smart (pictured) questioned the purpose of the Police Remuneration Review Body after it simply agreed with the Home Office and rejected the evidence from the National PFEW that police officers in England and Wales deserved a 2.8% pay rise.

The PRRB claimed a 1% rise would “help maintain effective recruitment and retention, and contribute to supporting morale and motivation” in policing. This was today (6 July) endorsed by Home Secretary Theresa May.

Nick said: “Police officers have lost some 13% in pay in real terms over the past six years. At what point have we done our bit for austerity? Frankly enough is enough – this is another nonsense below inflation pay rise. It is an insult to hard working cops.

“It seems we as a national Federation need a change of tactic and stance – we have tried to negotiate and reason and yet again we have been ignored. We are a soft target with limited rights, but it is abundantly clear now that the National Police Federation of England and Wales needs a different strategy.

“The fact that the report was not shared with the PFEW this morning prior to it been made public shows the contempt the Government has for the Federation and the members we respresent.

“After this latest kick in the teeth, perhaps it’s time to revisit a ballot on whether all officers want full industrial rights – polling our members using our new national database.”

Overall Nick said any words of praise for police officers from Theresa May were hollow and that it appears the Government are trying to make policing as unattractive as possible for serving officers – so they leave and reduce the pension bill.

Plans to scrap most Bank Holidays for officers were rejected by the PRRB as were calls for the Away from Home Overnight allowance to be scrapped. Some of these proposals put forward by the Chiefs council show that they do they do not have any real concerns for officers’ welfare and the frustrations many are feeling.