No legal protection for police drivers 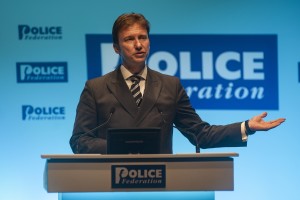 POLICE officers can be convicted, fined, banned and sacked for doing their duty when it comes to police pursuits, the Police Federation Conference has heard.

Officers were advised to “seek advice before ever making a statement” in a session entitled: “Witness or Suspect? Does pursuits legislation really protect police drivers?”

Leading Barrister Mark Aldred – a former police officer – said it was “much better for police to be a suspect that a witness”.

He said: “Being told that you’re a witness just makes the officer more vulnerable because witnesses don’t have the same safeguards.”

Mr Aldred is a prominent lawyer who successfully defended PC James Holden in a high profile Dangerous Driving case in 2012.

PC Holden was a Hampshire Police officer who was accused by the Crown Prosecution Service of putting innocent people at risk during a pursuit through Portsmouth.

Mr Aldred added: “Any pursuit or any response involves risk – it’s not fair to have a system that recognises that every pursuit and response creates risk and when risk materialises then straight away it’s pilot error and the officer is at fault.

“Before any [police officer] is asked to make a statement, the officer belief that they haven’t done anything wrong is neither here nor there, especially in a driving case. I would say seek advice before ever making a statement.”

The Police Federation of England and Wales is working with the National Police Chief’s Council (NPCC) to develop a draft legislation change.

Tim Rogers, National Police Federation Lead on pursuits, said: “We have a duty to inform our members of the risks they face when responding to an incident or pursuing a serial recidivist.

“We also have a duty to act in the public interest.

“I am sure the public would expect police officers to use their skills and professionalism to respond as quickly as possible to a call for assistance; they do not expect us to be obstructed by legislation.”