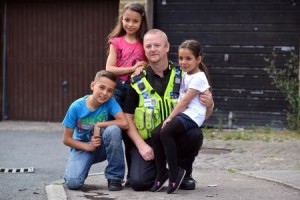 A WEST Yorkshire Police officer who ran through flames six times to save a family from a burning building has been nominated for this year’s Police Bravery Awards.

PC Sean Cannon was on call in Undercliffe in June last year when he heard screaming and saw a young boy jumping from a house, shouting: “Fire, fire.”

He went into the house three times, despite the choking smoke and flames, to carry out family members, including one from an attic bedroom.

“The fire was between the front door and the stairs, I just had to go through it. There was no other way,” he said. “I just didn’t think about it – all the adrenalin was pumping. I just did what I had to.”

Four children – two girls and two boys, aged between three and 13 – were among the people he rescued, as well as their great-aunt who suffers from epilepsy.

Jan Herak, the children’s father, who was not at home when the fire started, said he was extremely grateful for PC Cannon’s quick-thinking.

“The police officer saved my children’s lives. I’m very happy that he did it. I feel very grateful to him that he rescued my family. There was so much smoke. The kids were so scared,” he said.

Nick Smart, Chairman of West Yorkshire Police Federation, said: “We’re really proud to have nominated Sean for his actions on that day. What he did showed exceptional bravery in rescuing those individuals from the house and he’s rightly and deservedly our nominee for the National Brave Officer.”

PC Cannon will attend a reception at Downing Street and an evening awards ceremony in London on 14 July. This year will be the 21st anniversary of the Police Bravery Awards, which honours officers who have performed outstanding acts of bravery while on or off duty.

“We hope he’s considered favourably at the final judgement, because we do think it’s an outstanding feat of bravery that he’s shown, one which I’m sure that many police officers in the same situation would have equally shown,” said Mr Smart.

It’s not the first time PC Cannon has been involved in a heroic rescue. Two years ago, he dragged a man from a house fire in Bradford Manor.