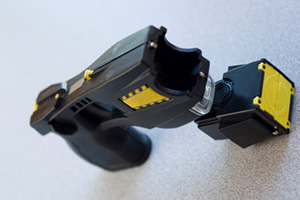 THE Chief Constable of West Yorkshire Police has committed to review the policy on how Taser is deployed in the force.

That’s the news from West Yorkshire Police Federation which has been “working with the force locally to maximise the use of Taser because we are aware there’s a significant amount of Tasers that are left idle in stations on a daily basis, and we want to maximise the usage of Taser”.

“We want officers to have as much protection as they can when they’re out there on patrol and minimise the risk of injury and assault to themselves.

“And also minimise the risk to people who are potentially self-harming, or who are dangerous.

“So the Chief’s promised to review it and we hope to see an increase in the number of police officers carrying Taser to protect our officers.”

Nationally, Chief Constables across England and Wales have announced that they have no current plans to issue Taser to all the country’s police officers.

However, the National Police Chiefs’ Council said that “chief constables make the operational decisions in their force areas and can increase the number of Taser-trained officers if their strategic threat and risk assessments show there is a need”.