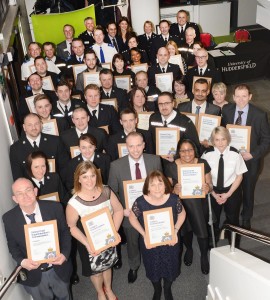 Police officers who have gone the extra mile to keep the communities of Kirklees safe have been commended at the Kirklees District Commander’s Awards.

The event was held at Huddersfield University with the awards presented by Kirklees District Commander Ch Supt Steve Cotter.

CSO Melanie Towers received an award, alongside PC James Berriman, for their actions in saving the life of a woman who had had a suspected heart attack in Dewsbury.

Four police officers and a CSO were recognised for their attempts to save the life of a man found apparently unconscious and unresponsive in a vehicle and the support they have the man’s family throughout the incident. PC Ashley Barrett, PC Thomas Phillips, PC Nigel Milner and PC Andrew Maloney attended and, alongside PCSO Katy Taylor, provided first aid, made contact with the man’s family and obtained more oxygen at his home. Sadly, the man passed away in hospital the following day but due to the officers’ actions his family were at least able to attend at the hospital and say their goodbyes.

PCs Liam Martindale and Christopher King received an award in recognition of their quick reaction and proficient use of CPR after being first on the scene of an incident in Huddersfield in which an elderly man was found hanging.

PC Harvey Bingham received an award in recognition of his skill, determination and commitment in bringing to justice a group of offenders associated with serious football related violence.

Judge’s commendations were also presented. DC James Bellhouse and Senior Analyst Chloe Froggett were commended for their outstanding professionalism and diligence in conducting a complex and challenging investigation in relation to a large scale conspiracy to handle stolen goods operation which led to the conviction of eight men.

Ch Supt Cotter said: “I am immensely proud of the work that is going on a daily basis across Kirklees district by our officers, staff and volunteers to protect the vulnerable and bring offenders to justice.”

“Everyone who has received an award should be extremely proud of the invaluable contribution they have made.”