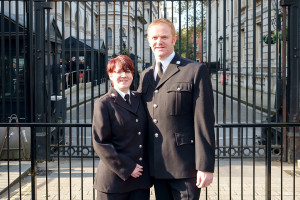 Two West Yorkshire Police officers who confronted a man wielding a sawn-off shotgun will be honoured at the Police Bravery Awards this evening.

PC Richard Whiteley and PC Suzanne Hudson are among 64 police officers from England and Wales who will be honoured for risking death and serious harm to protect the public.

The officers were attending a routine call when PC Hudson was shot at close range in December 2013. PC Whiteley was also threatened by the gunman as he tried to drag his colleague away and administer first aid.

Speaking outside Downing Street, PC Hudson said: “He basically saved my life. He performed first aid on me and brought me out onto the street, called for back-up and the rest is history I suppose.”

PC Whiteley insisted that he “did what any officer would have done”, but said he was thankful that he was able to be there for his colleague.

He explained that the impact of what had happened did not hit him until eight or nine months after the incident. “And it hit me with a bang to be honest,” he said. “It’s just great to be here with all these other brave officers, who are out there doing what we do and what we love. It is a job for life and you don’t know what to expect when you go to a call. It is a job like no other.”

Nick Smart, Chairman of West Yorkshire Police Federation, said he was “honoured” to attend the Bravery Awards with PC Whiteley and PC Hudson.

“They are being rightly recognised on the national stage for their truly brave actions,” he said. “We are proud of what they did and what they are still going through, and humbled by their modesty.”

Mr Smart said the awards “focus on acts of bravery both on and off duty, showing how police officers put themselves in mortal danger.”