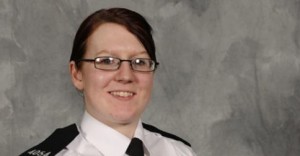 A man awaiting sentence for trying to blast a police officer from Pendle to death has been transferred from prison to a high security psychiatric hospital.

James Leslie shot PC Suzanne Hudson (pictured), who was born and brought up in Nelson, through his front door as she and PC Richard Whiteley made routine inquiries at a house in Leeds last December.

Leslie (38), of Cardigan Road, Headingley, is still to be sentenced, despite being convicted of attempted murder following a trial in July.

Leslie was brought to Leeds Crown Court yesterday where he was made the subject of an interim hospital order under the Mental Health Act.

The court heard he will now be moved from Full Sutton prison, near York, to Rampton, Northamptonshire, so he can undergo further psychiatric assessment.

The order, reported Pendle Today, will last three months, when Leslie is expected to be returned to court to be sentenced.

Imposing the order, Recorder of Leeds Judge Peter Collier QC said: “I am very concerned at this stage that he still he has not been admitted to Rampton.

“There are victims who want know what is happening. He has been convicted of serious offences.”