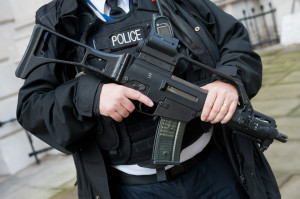 The number of firearms officers has fallen slightly at West Yorkshire Police – in line with a national decrease in armed capability, new figures have shown.

There were 95 authorised firearms officers at the force in 2009, compared with 85 at the last count this year.

Nick Smart, chairman of West Yorkshire Police Federation, said: “Every department is reducing in size – and unfortunately firearms are no exception – but we hope there are no further reductions as firearms officers play a key specialist role in keeping the public safe.”

Across England and Wales there has been a reduction of 760 officers in total during that period.

Mark Williams, chief executive officer of the Police Firearms Officers Associations and a retired firearms officer, said it is “naive to reduce the number of firearms officers in this climate.”

He added: “We need a bigger number of firearms officers as we face the unthinkable. There is a huge terrorist threat. We cannot get away from that, and the first line of defence is armed police officers.”

The figures were obtained through a Freedom of Information Act request – 37 forces replied. There was a reduction in firearms officers at 22 forces, while 15 forces saw an increase.

One force refused to reply, three forces provided incomplete figures and two forces did not hold the information.

The totals do not include Police Scotland – which does not record comparable figures – or the Police Service of Northern Ireland where all officers can carry firearms.

Mr Williams said the Police Firearms Officers Associations is seeing an increased number of calls from officers and their families needing support – thanks to forces reducing their occupational health departments and because the increased demand is having an impact on issues such as stress and anxiety.

He added: “If you reduce the number of firearms officers at a time when we are requiring greater numbers – we need good men and women to support us while we are under a great threat from terrorism – it is going to have a detrimental effect on their welfare.”

The greatest fall in authorised police firearms officers has been seen at the Met Police, where 752 posts have been lost; down from 2,897 in 2009 to 2,145 this year.

The biggest gain was at British Transport Police which did not have any firearms officers in 2009 but had recruited 61 by 2014.

Will Riches, Police Federation of England and Wales lead on operational policing, said: “In comparison to the overall number of [police] officers, the number who volunteer to carry a firearm are few. Firearms officers are highly trained and skilled in their roles and are often required to make decisions to ensure public safety.

“They know they may potentially have to take the life of another and if that were the case they would be subject to immense scrutiny and may even go to prison.

“Despite this enormous risk and the personal responsibility should the worst happen armed officers, together with the many other highly professional and specialised areas of policing, are available 24 hours a day to protect and serve the public.

“To make this a simple numbers game serves only to trivialise the reality and unique status of British Policing. The number of officers is irrelevant, the bigger issue is whether the public still have the police service they expect and deserve.”

In a statement, National Policing Lead on Firearms Licensing, Chief Constable Andy Marsh said the Crime Survey of England and Wales, released in October, “shows a 16 per cent reduction in overall crime over the previous year, and a six per cent decrease in crimes involving a firearm.”

He said: “Police, like many other public services, have seen considerable budget cuts in recent years. The need to make substantial savings has led to a reduction in officers and staff, including some firearms officers.

“The change of the firearms licence duration from three to five years in 1995 also created an intermittent decrease and then surge in the demand on police for licence renewals; a large part of a firearms officer’s role. We are currently in a period of decline in demand and a number of forces may have chosen to reduce their numbers of firearms officers during this time. This in turn may lead to an increase in staff when demand rises.”

CC Marsh added:  “It is important that, as austerity continues, any reductions in staff do not hinder our ability to effectively serve and protect the public. A lack of investment in the process of firearms licensing could lead to a poorer, less timely service and potentially present a rise in risk to the public.”