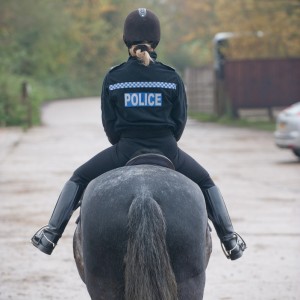 Mounted police patrols are associated with higher levels of public trust and confidence in the police, a report has found following a 25 per cent reduction in mounted units.

Since police budget cuts were announced in 2010, Essex, Cleveland, Humberside, North Wales and Nottinghamshire Police have disbanded their mounted units, reducing the overall number from 17 to 12.

A study commissioned by the ACPO says these decisions were taken “in the absence of systematic evidence” about the potential impact on overall policing capacity.

The research, carried out by the University of Oxford and research group RAND Europe between February 2013 and August 2014, set out to assess the value of mounted patrols.

The report, entitled ‘Making and Breaking barriers: Assessing the value of mounted police units in the UK’, found that “in neighbourhood settings, mounted police patrols are associated with higher levels of visibility, trust and confidence in the police”.

It said mounted police spend “substantially” more time on neighbourhood-level patrol or supporting local policing than on any other area of activity.

“In specific instances where coercive crowd control is required, mounted police provide a unique capacity that does not have obvious equivalent among other available police tools,” it added.

Nick Smart, chairman of West Yorkshire Police Federation, said: “Police horses are a valuable resource – as are police dogs – they are a much undervalued asset that can play a key role in reducing crime and keeping the public safe.”

The Police Federation of England and Wales welcomed the findings, pointing out that there is currently no national guidance for the necessary level of mounted resource required for an emergency response to a large-scale disorder or natural disaster.

For example, in the flood of winter 2013/14 mounted police were needed to access areas inaccessible to police officers on foot or police vehicles.

Rick Nelson, Secretary of the Federation’s Operational Policing Sub-committee, said: “We fully support the conclusions the report has made in relation to adequately resourcing neighbourhood policing.

“The unique value of mounted policing as a tool in relation to crowd control, violent demonstrations or natural disasters does not have an obvious substitute within other available police tools.”

ACPO’s national lead for mounted policing, Deputy Chief Constable Rod Hansen, said: “Despite the financial limitations, we must ensure that we do not inadvertently lose a capability that offers so much to policing services without fully understanding the consequences.”