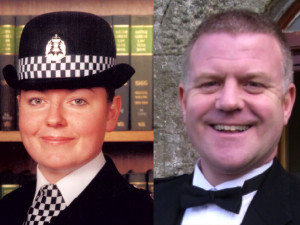 The police family has paid tribute to the officers, pilot and members of the public killed in the Glasgow helicopter crash a year ago.

A minute’s silence was held by the Scottish Police Federation and others at 10.22pm on Saturday 29 November – one year on from the exact moment at which the tragedy happened.

Ten people were killed when a police helicopter suffered a double engine failure and crashed into the Clutha bar in the centre of the city.

Wreaths were also laid at the scene.

Among those who lost their lives were Police Scotland’s PC Kirsty Nelis and PC Tony Collins (pictured) who had been returning from a police operation.

Captain David Traill, the pilot, was also killed when the helicopter crashed through the roof killing a further seven people. 100 people had been inside the bar and many sustained serious injuries.

PC Nelis was married and had received a commendation for bravery in the past. PC Collins left behind a wife and three sons; Ryan, Innes, and Gregor.

The event sent shockwaves through the police service, and tributes poured in from around the world.

The owner of the bar has since announced that he will reopen the bar with a memorial inside bearing the name of those who died.

Alan Crossan said the first anniversary of the tragedy was “very difficult for all concerned”. He said the memorial stone will feature two interlinked hands, in tribute to those who rushed to help, with the ten fingers representing the ten lives lost.

Brian Docherty, chairman of the Scottish Police Federation, said: “Our thoughts remain with the family, friends and colleagues of all who lost their lives. We shall never forget them.”

Nick Smart, chairman of West Yorkshire Police Federation, said with the National Police Air Support Service based in West Yorkshire, this anniversary was particularly felt. He added: “Our thoughts remain with our Scottish colleagues at this time.”