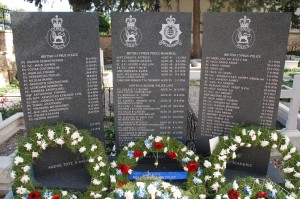 Families of fallen officers joined UK policing dignitaries at the unveiling of a new memorial to British police officers who lost their lives in the Cyprus Emergency in the 1950s.

Wreaths were laid at the new memorial in Kyrenia to honour all 62 police officers who lost their lives on the island during the crisis of 1955 to 1959. Of those officers, 18 were British, of whom 7 were members of the British Cyprus Police and 11 were from the United Kingdom Police Unit.

British Police officers were seconded from the UK to help as violence erupted during the terrorist campaign as Cyprus sought independence.

The United Kingdom Police Unit to Cyprus saw 1,000 officers from Britain serve during the emergency.

The memorial has been built at the old British Cemetery in Kyrenia in northern Cyprus and was unveiled on the weekend of Remembrance Sunday – on Saturday 8 November.

It was organised by The Police Roll of Honour Trust and cost £15,000. West Yorkshire Police Federation gave a donation to the charity.

Survivor Rose Weston laid a wreath in memory of her brother Temp Sgt Leonard Alfred Demmon, of the Met, who was shot dead by terrorists in 1956, aged 24.

Survivor Stella Bond laid a wreath in memory of her husband Temp Sgt Maurice ‘Tony’ Eden, also of the Met, who died aged 25, also in 1956.

Sir Hugh Orde attended the unveiling and laid a wreath on behalf of the Association of Chief Police Officers.

Denis Gunn, president of the Care of Police Survivors charity was also there. He said: “Despite the time elapsed since the crisis it was a very moving and well-attended service and the memorial now provides a fitting tribute to the fallen officers.”