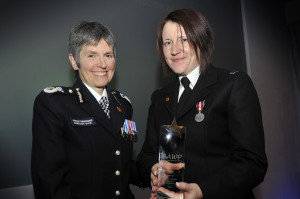 Police officers and staff from across the UK were recognised for their “courage, inspiration, excellence and extraordinary skill” at the annual British Association for Women in Policing Awards Ceremony.

Fourteen officers and staff – 13 women and one man – won awards at the event in Stratford upon Avon, including Police Officer of the Year, Bravery Award, Lifetime Achievement, Leadership and Excellence in Performance.

The event – which was held on 11 November – also included a two minute silence to remember those who have given their lives serving the country.

She added: “To all the award winners, many congratulations, we are very proud of you. Am sure every single one of you will say – “I was just doing my job, the job”. As we sit here today there are people doing extraordinary things, every day heroism, acts of amazing humanity and compassion and incredible skill, keeping our public safe and bringing offenders to justice and looking after victims.”

She also had a special word of thanks for the families of award winning police officers. Cressida added: “We do thank you but we also thank those who love you. Because you would not be here and do what you do if it was not for them.”

Winning the Bravery Award – dedicated to the PC Nicola Hughes Memorial Fund – was PC Colette Stoner, of Surrey Police, who confronted a knife-wielding man. She was joined at the event by her chief constable Lynne Owens.

Winning the Community Award was Insp Hazel Brady, from the Police Service of Northern Ireland, while Excellence in Performance went to DC Clare Cresswell, of Warwickshire Police.

There was loud applause for all winners of the BAWP Awards – presented by BAWP Vice President Fay Tennet – including in the Leadership category, where Insp Jeanette Richards, of West Midlands Police, picked up the prize.

There were two winners in the Lifetime Achievement Awards section – they were Yvonne Rhoden, formerly of the Met, and Jackie Roberts, formerly from Dyfed-Powys Police.

In the Mentoring category, Sgt Kelly Rooke, of Cheshire Police, was the winner, while overall Police Officer of the Year was given to PC Toni Love, of South Yorkshire Police. (pictured with AC Dick)

PC Love said she was “extremely proud and amazed to receive the award.” She added: “I enjoy being out and about, working with Specials, being out on the streets talking to people and helping them. I can’t believe it. I’m so proud – it’s brilliant.”

There were Special Recognition awards for Debi Potter, of Dorset Police and Sgt Gareth Wrigley of Cheshire Police. Sgt Wrigley had helped scores more female officers in his force understand what it is like to carry a police gun and then apply for firearms positions.

The Police Staff Achievement award went to Community Support Officer Guinnie Mooneesawmy, of the Met. Guinnie is one of the country’s longest serving CSOs, having been in the role more than 11 years.

Winners of the Contribution to International Policing – president by Colette Paul, chief constable of Bedfordshire Police – were Insp Christine Edwards and Ch  Insp Avrina Montgomery, of the Ministry of Defence Police and Sue Frank, from Cheshire Police.