Kids of COPS super skydive raises £7,000 for the charity 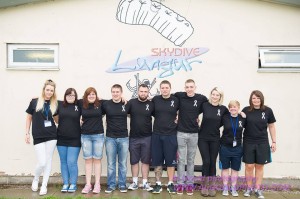 A group of daring children of fallen police officers have raised more than £7,000 for Care Of Police Survivors by jumping out of a plane.

It was third time lucky for the 10 members of the group (pictured) who took part in a tandem skydive on Saturday 25 October.

Abi Walker, daughter of West Yorkshire PC Ian Walker, was unable to complete the skydive on October 25, so will be doing it at a later date.

According to the organisers, all of the team “absolutely loved” the experience at Langer Airfield in Nottingham.

Initial attempts to get off the ground in July – on the Saturday of the annual Survivors’ Weekend – and then again in August had failed.

The group initially started out hoping to raise £1,000 – so were “really pleased” to gain seven times that amount of sponsorship.

Vicky Moore, organiser of the event, said: “I didn’t think in a million years that we would raise so much. People have given us support and donations from every direction so we are really thankful for that.”

She added: “A lot of people donate to charities and don’t realise how much it helps people – but this money will help COPS and families who have lost their loved ones on duty.

“COPS provides a support network that you need… getting together with other people… which means a lot in the healing process after losing somebody.”

Vicky said the team were “getting ideas together” for what to do next. “There will be another challenge coming up,” she predicted.