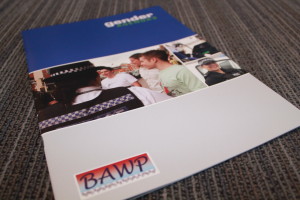 Being a woman in policing “is no longer a barrier to recruitment and progression” but instead it is family circumstances and caring obligations which are holding female officers and staff back, a new document has revealed.

The British Association for Women in Policing’s Gender Agenda 3 has stated that there is a “perception that that the police service is regressing” when it comes to the career development of female officers and staff.

Amongst other issues, the Gender Agenda 3 states there remains a “negative perception” of part time and flexible working in policing and it highlights “a lack of consultation and contact with women during maternity leave, with many observing difficulties in confirming their working pattern, allocated role and requirements prior to their return.”

The document was launched by the BAWP at New Scotland Yard on Tuesday (21 October). It will be used to highlight concerns and good practice with police and crime commissioners, chief constables and the College of Policing.

Cressida Dick, BAWP President and a Met Assistant Commissioner, said women are contributing a “huge amount throughout policing”, are now represented at all levels within the service and are “flooding” into certain specialist areas, such as CID.

However, despite the UK police service being “way ahead of other world police forces and other organisations” there is a fear that “having a representative workforce is no longer seen as important.”

The Gender Agenda 3 document is based on by research led by Manchester Metropolitan University – Policing Reform: Consequences for the gender agenda and the female workforce, published in January 2014.

“Many see that the police service is regressing rather than moving forward on the issue,” AC Dick said.

Women make up 28 per cent of police officers in England and Wales. Delegates and invited guests at the Gender Agenda 3 launch heard that there are currently 39 female ACPO officers but 14 forces have no ACPO women officers at all.

Included in those listening and participating in the diversity debate at the Gender Agenda 3 launch were Sir Hugh Orde, ACPO President, Irene Curtis, President of the Police Superintendents’ Association, and Dee Collins, currently chief constable of West Yorkshire Police.

Ch Insp Fay Tennet, BAWP Vice President, said: “BAWP is proud of how far women have progressed within the police service. However we recognise that further work and support needs to continue and we look forward to working with stakeholders so together we can deliver the best service to the public.”

The Gender Agenda was originally launched by the BAWP in 2001 as “a document designed to highlight the working environment experienced by women officers in the police service, with some positive suggestions on what the Service and individuals can do to improve the current situation.”

This was followed up by the updated second version in 2006 with the aim of having “a thriving Police Service which supports women in achieving their full potential and making their full contribution to policing.”

AC Dick added: “Gender Agenda 1 and 2 played a significant part in helping the police service to improve the position of women in the police. I am grateful for the courage and leadership shown by those who have brought above fantastic changes over the past 30 years.”