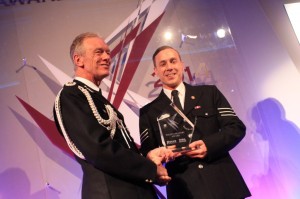 A police officer who confronted and apprehended a sword-wielding attacker has won the overall award at the National Police Bravery Awards.

Sgt Stephen Brown, of the Met, pursued the man after he attacked a woman as she was getting out of a cab on a night out in Islington, north London, on Christmas Eve 2012.

He is pictured at the awards with Met commissioner Sir Bernard Hogan-Howe.

Sgt Brown managed to CS spray the knifeman’s face before hitting his arm with an extendable baton and jumping on him as he fell – allowing colleagues to help arrest him.

Home Secretary Theresa May, who attended the awards, said: “The actions of Sgt Stephen Brown are a powerful reminder of the commitment and courage that police officers bring to their role.

“Sgt Brown put his own life in danger to defuse a terrifying situation. His intervention protected the public and may well have saved the lives of others.”

She told the audience: “You really are the best police officers in the world…”

Sgt Brown was among 65 nominees from 31 forces singled out for valiant acts of bravery.

All were invited to Downing Street for a reception with Prime Minister David Cameron, who passed on his personal congratulations and thanks.

He said: “The Police Bravery Awards are an important opportunity for us to recognise, celebrate and thank our most courageous officers.

“I’m immensely proud to be Prime Minister of a country that has such men and women enforcing our laws.”

Steve White, chairman of the Police Federation of England and Wales, said: “I am constantly humbled and amazed by the selfless acts of bravery carried out by police officers on a day-to-day basis.

“For every act of courage and bravery recognised in the Police Bravery Awards there are hundreds more that occur in our communities every day that go unrecognised.”

The awards were sponsored by Police Mutual. One North Wales Police officer summed up the mood of the evening. He said: “Officers do extraordinary things every day of the year…”