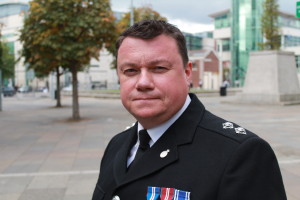 Police officers are “afraid to do their job” because they live in fear of being accused of wrongdoing, the chairman of the Police Federation of England and Wales has said.

Steve White (pictured) described a culture of fear in the police service that has seen officers wanting to wear body worn cameras just so they can prove they are innocent of any accusations.

Mr White said the levels of scrutiny placed on officers had gone “too far” and he warned that the Government must “back off” and let police officers get on with their jobs.

Body cameras were originally introduced to policing collect high quality evidence and to save officers time on paperwork. But now “cops are saying ‘I want body cameras because I have done nothing wrong,’” said Mr White.

“Officers are almost afraid to get on and do their job – unless they have got something like a body worn video camera to justify what they are doing,” Mr White said.

He added: “It is quite right that the police service is held to account and there is the ability to scrutinise. But I think it is gone absolutely too far. It is a fairly sorry state of affairs – this Government has talked about increasing discretion for police officers in terms of acting professionally and making professional judgements. They need to back off and let us get on with it.”

Mr White said the organisation “have had had deep concerns with the Independent Police Complaints Commission [and] have done for some time.”

He added: “We have always maintained that police complaints and misconduct should be dealt with by a completely and utterly independent body that is properly resourced and has the confidence of both the police service and the public. And the IPCC is not that at the moment.”

In a cautionary note, Mr White also warned that body worn cameras were not the answer to everything.

He added: “The concern of the Federation is that you’re bound to get a situation where a body worn video camera is being worn by an officer and for whatever reason, at the appropriate time it failed to work, and we need to make sure that officers are not going to be hung out to dry when, inevitably, in high stress situations that button hasn’t been pressed for example.”

“We mustn’t get to a point where members of the public are afraid of speaking to officers because everything is recorded by a camera on the officer’s body.”

A spokeswoman for the Independent Police Complaints Commission said that central to its work is its “independence and transparency.” She added: “We are as committed to publicising when we find there isn’t a case to answer as we are to holding a force or individual officers to account when there is.”