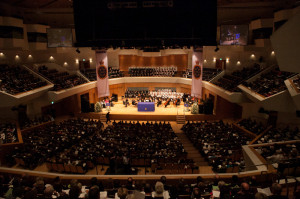 Prince Charles hailed the “exceptional bravery” of officers as he joined the congregation in Northern Ireland for the eleventh National Police Memorial Day.

The event’s patron, the Prince joined around 2,000 police officers of all ranks, politicians and families of fallen officers at the annual service, this year held on Sunday (28 September) at the Waterfront Hall in Belfast.

Eight police officers and one member of police staff who have died on duty in the last 12 months had their names read out during the 65 minute service.

Prince Charles said: “The British Police Service is a noble profession, respected and admired throughout the world. The courageous men and women who proudly form its ranks are a shining example of the best of public service.

“Day after day, they place our safety above that of their own in order that we may live in peace.

“I wish to honour the exceptional bravery of those who have lost their lives in the line of duty and to assure those left behind, who must carry the heavy and heart-breaking burden of their loss, that they are remembered.”

Home Secretary Theresa May, who attended and gave a reading, said: “Police officers go to work every day knowing that they could find themselves in danger, and sometimes they risk their very lives as they protect the public.

“We owe a debt of gratitude to officers across the country who show bravery as a matter of course and in many cases while they are off duty.

“I am honoured to take part in National Memorial Day and to commemorate the police officers who have fallen.”

The Piper’s Lament was played as a wreath was laid to remember the police officers who lost their lives in the First World War – which began 100 years ago.

During the service, candles were lit by relatives of fallen officers in remembrance of those who who have lost their lives.

There was silence as petals of remembrance, representing all who have lost their lives, descended from the gallery as the orchestra played ‘Abide with me’ and the Last Post was sounded.

Sgt Holness said around 4,000 police officers had given their lives in the line of duty since modern policing records began in 1792.

“There are between 10 and 15 fallen officers every year,” he said. “It is not too much to ask for one day a year to be set aside to remember their commitment to the public.

“We were honoured that Prince Charles could attend.”