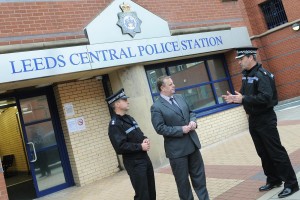 The new police base for neighbourhood officers serving the centre of Leeds has been officially opened.

As well as providing a base for the City Neighbourhood Policing Team, the building includes a public enquiry counter which opens every day from 8am to 10pm.

The station went operational on August 7 when officers from the City NPT moved from Millgarth Police Station, which has been sold to Leeds City Council and will soon be demolished to make way for the new Victoria Gate development.

Ch Supt Paul Money, Leeds District Commander, said: “With the recent move to our new headquarters at Elland Road and the closure of Millgarth, we felt it was really important to continue to have a police station in the heart of the city.

“The former Leeds Bridewell was identified as a suitable place that could be converted at minimal cost to provide a central base for the neighbourhood officers that serve the area along with an accessible public enquiry counter.

“In the six weeks that the team has been operating from the new station it has continued to be very much business as usual in policing the city centre.”

He said: “This Leeds base will provide the city and local community direct contact with their Neighbourhood Policing Team ensuring good visibility in making sure our communities are safer and feel safer.”