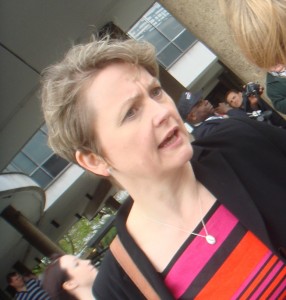 The Labour Party has announced it will scrap Police and Crime Commissioners if it wins the General Election – and will instead put £50 million back into front line policing.

At its annual conference in Manchester, Shadow Home Secretary Yvette Cooper (pictured) confirmed PCCs will be abolished and replaced with “accountability to local government.” The Party also said it will halt Home Office plans to axe a further 1,100 police officer jobs next year.

And it said the public would have more power to decide police officer numbers in their areas.

When it comes to replacing Police Authorities, Labour said it is consulting on the details of the best framework for each force. It said options include:

Mrs Cooper said: “This was Theresa May’s flagship reform and it just hasn’t worked. The model is just fundamentally flawed. They spent £80 million on the original elections. It will cost £50 million to hold the next elections.

“To spent all that money on something where so few people vote, when you could put that money back into policing is wrong.”

She added: “You’re concentrating power in the hands of one person who can’t be held to account for four years. As you saw in South Yorkshire, we called for Shaun Wright to stand down but there was no mechanism to hold him to account.”

Labour also announced “a new system of Independent Chief Inspectors [of policing], under the auspices of the new Police Standards Authority.”

Independent Chief Inspectors will – Labour stated – lead inspections and uphold higher standards of policing set by the College of Policing, publish report cards and mandate changes within a force if standards have fallen below expectations, lead independent investigations into allegations of misconduct or of serious failings within a force – without the need for referrals and recommend a Chief Officer should be suspended or sacked.

The party also stated that local policing will be accountable to their local populations, with new statutory underpinning for public meetings, consulting on local policing plans, and even a role in choosing replacement police commanders for Community Safety Partnerships, together with the Chief Constable.

The Party said an unspecified amount of money will also be saved by “bearing down” on overtime.

Labour says this has been reduced in recent years, but claims some forces are still under-performing compared to the vast majority. Forces with large public order commitments are not included in these plans.

Nick Alston, chairman of the Association of Police and Crime Commissioners (APCC), said it would be “a backward step to return to the era of invisible, unelected police authorities during which so many failures of police leadership occurred without any meaningful oversight.”

He added: “The APCC recognises that the legislation surrounding the election and oversight of PCCs can be improved, and is developing proposals for ensuring these issues are addressed.”